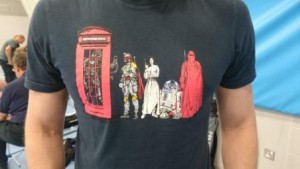 Posted on May 25, 2016 | Comments Off on Overgrown phone box in St Michaels

Covered in thick foliage and buried deep into the hedgerow, this phone box in St Michaels felt like “something from I’m A Celebrity”.

“If you were slightly scared of insects you really wouldn’t want to be in there. It was quite horrible to go inside. It felt like one of those awful things from I’m A Celebrity – it would be one their terrible tasks to actually shut the door!”

In the popular reality show, contestants perform tricky or terrifying tasks – bushtucker trials – to win food and treats for their camp and most of the challenges involve creepy crawlies.

The kiosk next to the Fat Ox pub still works but as most people have a mobile phone now, it is rarely used.

Their production of telephone boxes ended altogether in 1985 with the advent of the KX series phones and many kiosk around the country have been broken and abandoned.

“I tweeted pictures of it to BT showing what a state it was in and they actually replied to say they would get this sorted, so well done BT for wanting to do something about it.”

Comments Off on Overgrown phone box in St Michaels

Local phone box is a place to lay tribute to a much loved village goose. 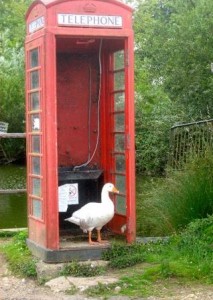 Villagers have been left devastated after a goose which had been a much loved part of their community for over a decade was shot dead.

Residents were outraged after learning their feathered friend had been killed in a “spineless” attack, shot close to his left eye with what is thought to have been an air rifle, just yards from the pond where it hatched 11 years ago.”

Comments Off on Goose tribute

Posted on December 11, 2015 | Comments Off on Merry Christmas Everyone 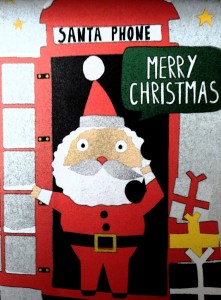 Comments Off on Merry Christmas Everyone 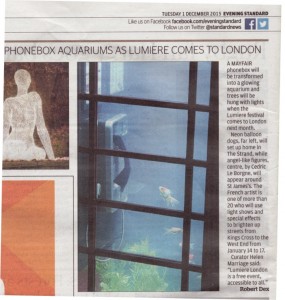 A Mayfair phone box will be transformed into a glowing aquarium and trees will be hung with lights when the Lumiere festival come to Lndon next month.  Neon balloon dogs will set up home in the Strand, while angel-like figures, by Cedric Le Borgne, will appear around St James. The French artist is one of more than 20 who will use light shows and special effects to brighten up streets from Kings Cross to the West End from January 14 to 17. Curator Helen Marriage said:

“Lumiere London is a free event, accessible to all.”

Comments Off on Phone for fish

Posted on November 12, 2015 | Comments Off on Mexico City public toilets

Another guy that takes photos of urinals… 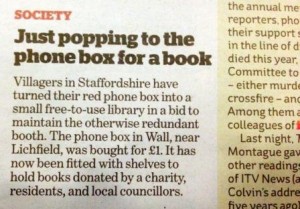 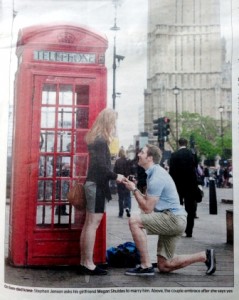 The Evening Standard (15 June 2015, p.3) reports of US tourist Stephen Jensen proposing to his girlfriend Megan Shuldes in from of Big Ben (I had just visited Big Ben with family). But for our purposes it was in front of a classic red, telephone box.

Comments Off on Marriage proposal

As a former librarian I warm to this story.

Comments Off on Phone box library 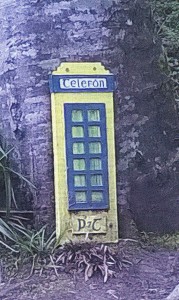 Comments Off on Fairy phone box