And another story about closures… My thought – if it costs £310 a year to maintain the box then can the three groups quoted in this article all throw in £100 a year to sponsor the phone-box? BT can pay any remainder costs and everyone should be happy. Anyway, the story:

The traditional red phone box, which sits 2,150 ft up Cairngorm at the skiing base station, is an iconic feature at the resort. But after the resort ranger found a note from BT inside it, saying it was to be scrapped to save money, locals have been fighting to save the UK’s highest phone box, claiming it not only serves as a popular tourist attraction, but is a vital lifeline for those on the mountain. 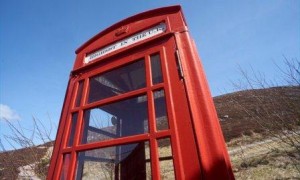 The latest group to voice its opposition to BT’s plans is Aviemore & Vicinity Community Council, which has decided to formally object to its removal. “We felt it should be retained on safety grounds, but that it should only be available for 999 emergency calls,” said chairman John Grierson.

“Mobile phones do work in the area, but not everybody has one – or after a long day on the hill, their battery is run down.”

Natural Retreats, which operates the CairnGorm Mountain resort, has also backed the campaign by urging people to register their protest with Highland Council. The company describes the phone box as “a potentially life-saving tool … due to increasing costs, this iconic landmark could be disconnected, so we’re reaching out to you to help us save this much-loved figure on the Cairngorm landscape.”

Mountaineering Scotland has echoed this view, saying public payphones can be a “lifeline” and urged the Highland Council to push BT to retain those located in areas of interest to mountaineers.

“The closure of these payphones could result in a risk to life if those involved in a mountaineering accident seek urgent contact with the police and mountain rescue.”

The campaign to save the phone box follows an announcement from BT that it plans to remove thousands of phone boxes across Scotland. It says that 700 of the boxes were not used for a single call last year.

According to BT, just five calls had been made from the Cairngorm mountain phone box in the same period. Each phone box costs £310 to maintain annually.

A spokesman said: “BT is committed to providing a public payphone service but, with usage declining by over 90% in the last decade, we’ve continued to review and remove payphones which are no longer needed. Any removal of payphones is carried out in strict adherence to the Ofcom guidelines and, where appropriate, with the consent of local planning authorities.”

Cross-post from the Guardian

This entry was posted in News. Bookmark the permalink.