Posted on May 25, 2016 | Comments Off on Overgrown phone box in St Michaels 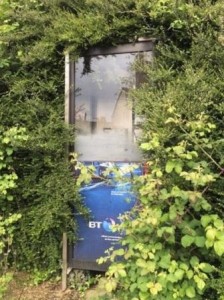 Covered in thick foliage and buried deep into the hedgerow, this phone box in St Michaels felt like “something from I’m A Celebrity”.

“If you were slightly scared of insects you really wouldn’t want to be in there. It was quite horrible to go inside. It felt like one of those awful things from I’m A Celebrity – it would be one their terrible tasks to actually shut the door!”

In the popular reality show, contestants perform tricky or terrifying tasks – bushtucker trials – to win food and treats for their camp and most of the challenges involve creepy crawlies.

The kiosk next to the Fat Ox pub still works but as most people have a mobile phone now, it is rarely used.

Their production of telephone boxes ended altogether in 1985 with the advent of the KX series phones and many kiosk around the country have been broken and abandoned.

“I tweeted pictures of it to BT showing what a state it was in and they actually replied to say they would get this sorted, so well done BT for wanting to do something about it.”

This entry was posted in Geography, News and tagged curiosity. Bookmark the permalink.