A Welsh village is trying to save its beloved red telephone box from being scrapped because it helped protect them during World War II.

The phone box in the quiet village of Bryn-y-Gwenin, near Abergavenny, South Wales,, was used to warn of air raids.

Now the villagers want BT to save the box because of its wartime role when it was “the main point of contact” for warnings of Nazi bombing raids.

The villagers have enlisted the help of Conservative MP David Davies in their campaign to save the phone box.

Mr Davies said keeping the phone box would preserve the village’s history as well as serving a practical purpose. He said: “Mobile signal in this part of rural Monmouthshire is intermittent and very poor at best, so the public telephone box is an essential village amenity for Bryn-y-Gwenin.

“It also serves Llanddewi Skirrid and the surrounding area. With the Skirrid mountain a popular spot for walkers and cyclists, the significance of the box is paramount in an emergency.

“BT claims the phone box has had very little use over a significant period of time. Calls may well be small in number but one day that call could be very important and potentially life-saving.”

Previous plans to decommission the box were successfully overturned in 2016 following a similar local campaign.

“One of our villagers, Richard Cox, cleans it on a weekly basis and repaints it when necessary.” he said.

“The box has always been a proud landmark at the entrance to our village.  It is an iconic part of British heritage yet sadly, these red telephone boxes are getting more and more scare in the countryside.

“It has been stated in the past that if the phone itself was removed but the box remained then the villagers would be prepared to have a defibrillator installed as it would be a very strategic place for one to be available.”

The phone box is a K6 model, designed to commemorate the silver jubilee of King George V, and entering production in 1936.

It was originally connected to the village post office via a party line.

On Twitter, Mr Davies posted a video of himself at the phone box and surrounded by residents.  He said: “This phone box played a small role in defending Britain during WW2. It is being lovingly cleaned & maintained by a local resident. After decades of loyal@service @bt_uk want to scrap it.”

BT has launched a consultation period to determine the phone box’s future.

A spokesman for BT said: “Most people now have a mobile phone and calls made from our public telephones have fallen by around 90 per cent in the past decade.

“We consider a number of factors before consulting on the removal of payphones.”

Cross-post from The Telegraph

Comments Off on Community spirit

Which leads nicely onto this: 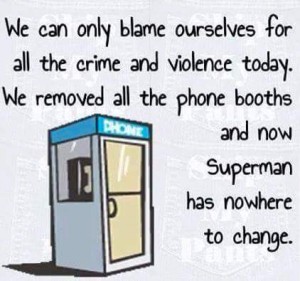 Comments Off on Phone closures